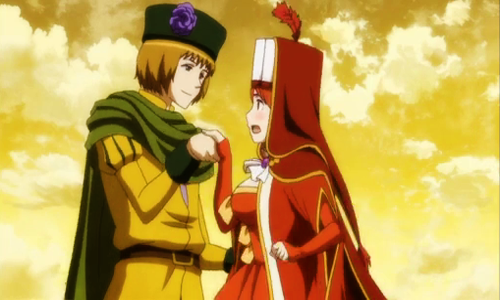 Maou held a negotiation meeting with the Alliance. She introduced the idea of growing corn in the regions unsuited for raising other crops. The young merchant of the alliance wondered why she’s doing such thing and she answered that she wanted to end the war that’s neither victory nor defeat. As the negotiation go further, both parties became nervous of each other. But Maou successfully pulled it off to the point that the young merchant proposed to her. Yuusha, on the other hand, has been avoiding Maou for the past six months which made her distracted and uneasy of his absence. Meanwhile, the Central Nation ordered an attack to the Demons on the Bright Light Island.

Maou will do anything just to reach her goal – peace. Even to risk her life and status with the negotiation she held with the merchants of the alliance. Not that they’ll be able to harm her though. But the Alliance are gaining something from the war so getting help from them to end it seems a bit impossible. She introduced the use of corn so that the large area of land which was unproductive until now will be put into use.

With this plan, Maou can help avoid famine by producing more crops and the merchants will gain more money from the harvests. She told them that that’s the second strongest bond between heaven and earth, gaining from one another. That impressed the merchant. Be a merchant before being a human.

For the past six months, Yuusha’s been avoiding Maou, making her believe that he’s still in the demon’s world fighting the rebels. The reason? He’s scared that he’s not much of a hero. He even pictured himself dead and Maou’s on the verge of tears. He’s afraid of taking the next step, deepening their relationship, because if he were to die it will be harder for her. He can’t find his use for her and he thinks that Maou has been preventing him to fight (the only thing he can do). But he doesn’t know that him being around is enough.

Now, Maid Ane is questioning whether she’s human now. Previously, she asked the head maid to make her, them, human. So she asked the Knight to teach her how to fight. 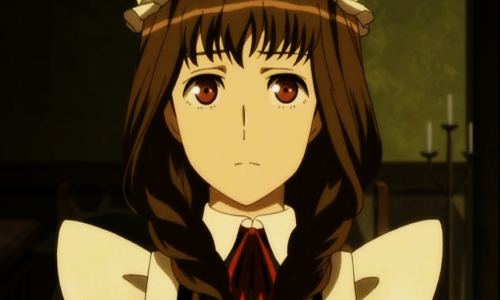 Again, no actions for this week’s episode. But at least, the negotiations put up a thrill. I just hope the negotiation didn’t go well so that we’ll see at least a little bit of action. But then again, there will be a war that will happen in the Bright Light Island that I’m going to look forward to.